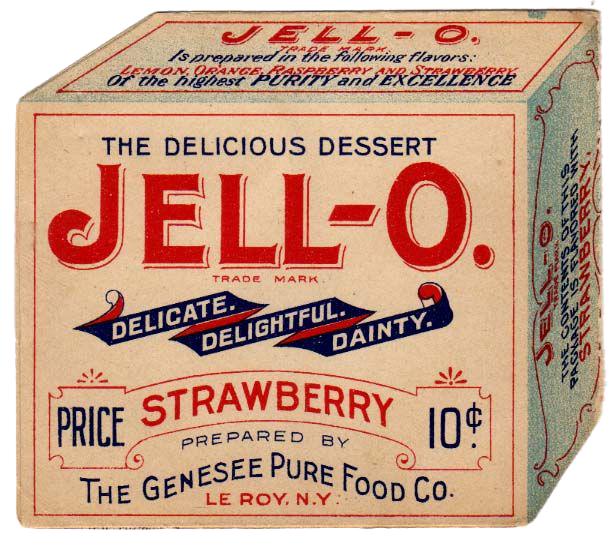 Many of the foods we love today (and some we hate) debuted or had their hay-day in the 20's. Marketed as innovative, thrifty, and time-saving, these foods promised to revolutionize family life.

Gelatin dates back to the 17th century and was traditionally made by boiling the bones and hooves of large animals for long hours, which was both a complicated and labor-intensive process. Thus, only the European upper-class were able to enjoy desserts made with gelatin — at least until 1845 when Peter Cooper (of NYC's Cooper Union school fame) patented unflavored "portable gelatin" for manufacture in the U.S., making it widely available. But without marketing, the novelty failed to capture American hearts.

The dessert as we know it did not exist until 1897, when upstate NY carpenter Pearle Bixby Wait created a gelatin-based cough syrup — which his wife endearingly called Jell-O — by adding strawberry, raspberry, orange, and lemon flavoring to granulated gelatin and sugar Short on funds, Wait sold the trademark to Genesee Pure Foods Co. In 1902, Genesee launched its campaign for “America’s most favorite Dessert” with an ad in The Ladies’ Home Journal. In a pioneering marketing free Jell-O cookbooks. By 1914, three new flavors, chocolate (!), cherry, and peach, were added, 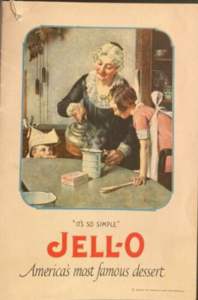 Sales of sugar, and therefore Jell-O, were rationed during World War I, but in the interwar period (the 1920s and '30s), the popularity of gelatin salads soared. Jell-O's manufacturers also did a top-notch job of promoting their products. They released numerous small recipe booklets, many of which were given away free with purchase or distributed door-to-door by an all-female team of sales representatives. As part of one early publicity campaign, the company even went so far as to hand out free Jell-O molds to immigrants arriving at Ellis Island. What better way to start out their new lives than with a popular, all-American dessert?

By 1923, not only was Jell-O a mainstay of American kitchens, but D-Zerta, an artificially sweetened version of Jell-O had joined the family. This was the same year the company hired an emerging new artist  to illustrate some colourful ads for their products. The artist's name was Norman Rockwell.

And Jell-O was not only for dessert. An ad in a 1926 issue of Woman’s Home Companion promised an extravagant Christmas dinner through four simple Jell-O recipes: Jell-O Cranberry Ice, Jell-O Olive Salad, Jell-Fruit Cocktail, and Jell-O Plum Pudding.

If I'm being brutally honest, I can't swallow Jell-O, but perhaps that is because my mother was an aficionado who produced such novelties as 'tomato aspic with horseradish cottage cheese' throughout my childhood. If you have happier memories than I do, here's a recipe from 1929 you might (or might not) want to try out on your family. 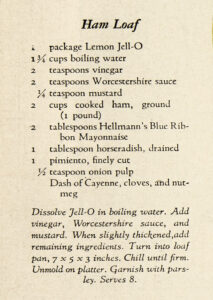