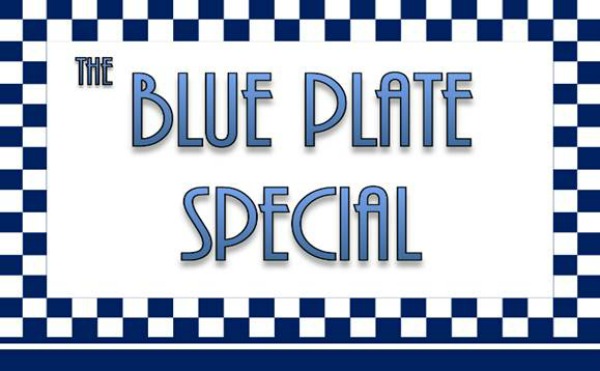 Back in the days when I was a reporter (long before the internet), one of our favourite lunch spots was a small restaurant around the corner from the newsroom. Most days we ordered the blue-plate special which was invariably delicious, filling, and inexpensive. Ever wonder where that term came from? Apparently, this is a very American term, unknown in other English-speaking countries.

blue-plate (adj.)
in reference to restaurant meals, 1918, from blue (adj.1) + plate (n.). The term arose in the trade, to refer to a complete dinner offered at a reasonable price and served on a single, large plate of a good grade of china.

Some say the phrase originated in October 1892, on the menu of a Fred Harvey restaurant, where “Harvey Girls” served up the blue-plate set meal to the lonely cowboys, cattlemen, miners, railroaders and hungry passengers of the Atchison, Topeka, and Santa Fe Railroad. It was 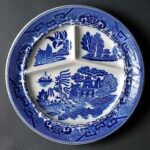 designed to rapidly serve passengers whose trains stopped only for a few minutes. Others suggest “blue plate” pricing policy came into favor during and after World War I, as a price-cutting measure to combat wartime, and post-wartime economic problems and profiteering by restaurant owners. Blue-plate specials were viewed as an alternative to the wasteful table d'hôte and pricey a la carte service options. Serving a pre-planned, daily special, on one plate, would reduce prices, cut costs, and streamline the ordering process.

Cobalt-blue has been commonly used as a pigment for crockery since the Chinese developed the Willow Pattern design in the 17th century. The number of pieces of blue and white pottery that gardeners find while digging up flower beds is evidence of its past popularity. Blue-plate specials were served on blue plates, usually divided into sections for meat, potatoes, etc. The 1927 Sears,Roebuck catalog offered a 32-piece English Blue Willow Dinner at an attractive price. Looking at a picture of the dinnerware, it doesn’t take a genius to figure out how the term came into usage.

In early 1920, at least one (aptly named) restaurant in New York City served “blue plate”-style, fixed-price meals for a price equal to $7.23 today.

"At the Blue Plate, 56 West 50th Street, a 50 cent luncheon is served, and dinner at 75 cents. Meals are served from blue plate old English willow ware. The proprietor came from the West, where he turned away disappointed crowds every evening. The steaks, baked Virginia ham and other dishes made his reputation." [Valentine’s City of New York; a Guide Book, New York, 1920 ]

By 1924, even the YWCA offered blue-plate specials. Theirs, unlike most, included bread and 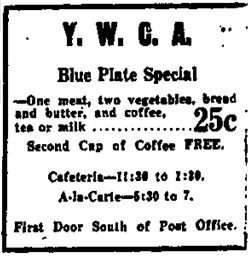 a beverage and, in today’s dollars, cost is $4.