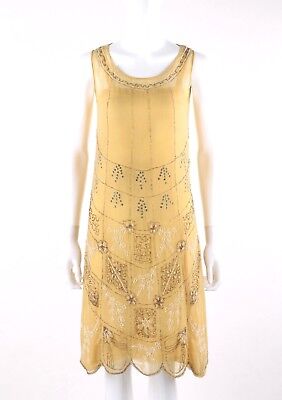 You’ve received an invitation to a Roaring 20s costume party. If you’re a woman, you will immediately start scanning the Internet for an above-the-knees, fringed flapper dress, as well as a feather boa, long cigarette holder, and flapper headband.

Great outfit. Unfortunately, it wouldn’t be accurate, at least not the dress.

For the most part, typical 1920’s evening dresses weren't covered in fringe and they did not rise above the knees — at least not until the latter part of the decade.

Fashion in this era was typified by:

Not all women wore the "short" skirts or the daring styles of the flappers. Skirt hemlines began to rise in 1913 when skirts stopped just above the ankles. By 1918, hemlines had risen to just below calf length and for the next several years showed variations of a few inches one way or another.

In the early 1920s, hemlines gave the appearance of shortening when uneven, scalloped, and handkerchief hems became fashionable. It was not until 1925 that fashion mavens witnessed the dramatic rise of skirt hems into the Flapper style generally associated with women's clothing of the Roaring 20s but was a relatively short-lived phenomena.

Skirts rose to just below the knee by 1927, allowing flashes of leg when a girl danced or crossed her legs. Some flappers applied rouge to their knees to enhance the view of those legs.

Fringe wasn’t the norm for adornment in the 1920s; that would be beadwork or embroidery. In the early Twenties, synthetics had not yet been developed so fringe was made by weaving innumerable silk fibers into a dense knit. Multiplied across enough rows to cover a dress, all the fringe would easily surpass 25 pounds. So, while it did exist on dresses, it tended to be used in moderation as a decorative element to help the dress drape correctly.

Chanel and other designers did offer fully fringed dresses, but theirs were more likely to feature fringe made from strands of gelatin sequins, greatly adding to the complexity — and cost. 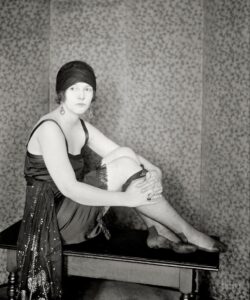 The image above, from 1922, is possibly Julia Farnham, step-daughter of sculptor Sally Farnham (from the George Grantham Bain Collection in the Library of Congress). Note the small amount of fringe on the hem of the stylish flapper dress.

So here’s a checklist for your flapper costume: