A Rockefeller by Any Name 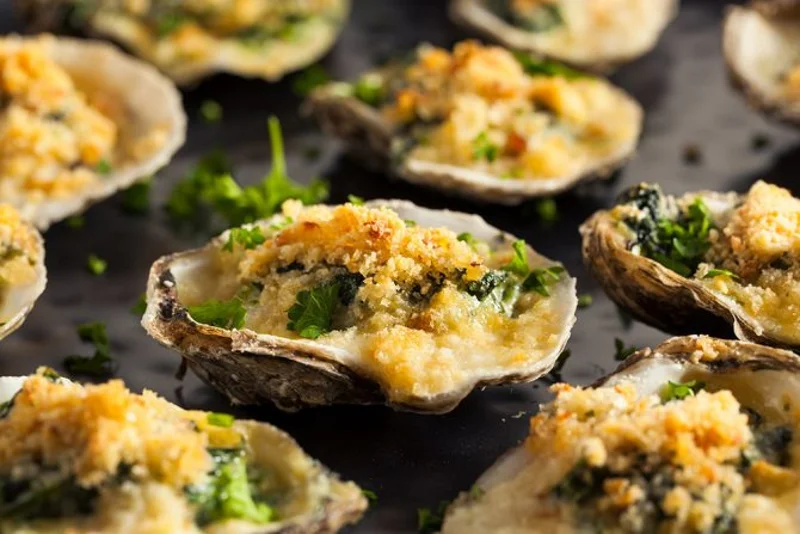 Oysters Rockefeller was created in 1889 at the New Orleans restaurant Antoine's by Jules Alciatore, son of founder Antoine Alciatore. Jules developed the dish due to a shortage of French escargot (snails), substituting the locally plentiful Gulf Shore oysters.

The dish was named Oysters Rockefeller after John D. Rockefeller, the then-wealthiest American, for its extreme richness.

The original oysters Rockefeller is said to have been made with watercress, not spinach. According to folklore, Jules Alciatore exacted a promise on his deathbed that the exact proportions be kept a secret forever, but a true Rockefeller riff is bold and vibrant consisting of oysters on the half-shell topped with an herbaceous green sauce and a splash of anise-flavoured liqueur, then baked or broiled. Some debate whether bread crumbs and/or bacon should also be included. Others argue that the original liqueur was Pernod Fils absinthe, a popular Victorian-era tipple that was banned 1915. Some chefs tout Herbsaint as the essential ingredient, however as Herbsaint debuted in 1934, it could not have been in Jules Alciatore's archetypal recipe.

Gastronomes also argue on the best way to eat this treat. Swallow whole or chew? My best advice? Chew the oyster one or twice before you swallow it. It's an urban legend that you are supposed to let it slide down your throat without biting into it. If you don't chew the grape, you won't get the full flavor.

However, you make or eat them, Oysters Rockefeller very much in vogue during the Roaring 20s. Oysters and icebox cakes, but I'll save that for another day.

1. Put a 1⁄2-inch layer of the rock salt in 2 large jelly-roll pans.
2. Cook the bacon in a large skillet over medium heat 4 to 6 minutes or until crisp; drain, reserving drippings in skillet.
3. Add the butter and the flour to hot drippings; cook, stirring constantly, 3 to 5 minutes or until golden brown. Add the spinach and the next 5 ingredients. Bring to a simmer. Cook, stirring occasionally, 10 minutes or until very thick. Remove from heat. Stir in the absinthe and bacon, and add table salt to taste.
4. Preheat the broiler with oven rack 6 inches from heat. Arrange 18 oysters on salt in prepared pans; top with the spinach mixture. Broil 4 to 6 minutes or until lightly browned.